Much to be Thankful For.

Thanksgiving has come and gone, but the spirit of thanksgiving has been lingering as I've reflected on the past year. Last December, I had just found out through an ER visit, CAT scan, MRI, and a series of doctor appointments that I had two very large ovarian cysts (grapefruit size) on my left ovary. At the time, these cysts could have easily twisted and caused a lot of pain and damage to my reproductive organs. I had urgent abdominal surgery on December 16, 2008. The surgery left a vertical seven-inch scar on my stomach. Internally, the cysts were removed, as well as my left ovary and fallopian tube which were already beyond repair. I was blessed with a remarkable, world renown surgeon who skillfully left as much of the reproductive organs intact as he could. 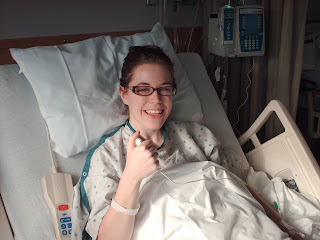 Recovering after my surgery in December 2008 (with Morphine drip in hand).
A few months later, I was told that the cysts had been partially cancerous, but the cancer was contained. It remains unclear as to why the cysts grew in the first place, as given my age and the size of the cysts, I'm an "abnormal" case. I will continue to have annual CAT scans and bi-annual check-ups to proactively catch any new cysts or cancer that may return. After going through such an experience, my husband and I decided to start trying to conceive. It didn't take us long to have a little miracle on the way... four months after the surgery, I became pregnant! We have been so incredibly grateful to God for giving us this baby, when at one point, we weren't sure pregnancy would be an option for us, or at least not an easy achievement. 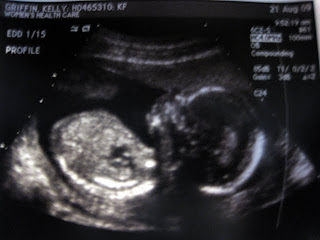 Baby Anna at her 20 week ultrasound.
Over the past eight months, I often have worried about baby Anna. I think I have expected (or feared) some complications to arise after having such unexplained health problems a year ago. However, the pregnancy has been very smooth and problem-free! For the most part, I have felt great and Anna continues to check out well. I have come to a point where I remind myself that God is in control, no matter what happens to myself or my baby. He knows and has a perfect plan, despite what I want or understand. I'm thankful that I did not become pregnant before these cysts were discovered, as such a situation could have caused quite a complicated pregnancy! I'm also thankful that the cysts grew to such a large size that I started having abdominal pain, prompting me to go to the ER. I'm not sure how long they had been inside me, and if they had burst or twisted, the cancer would not have been contained and I would have had horrible pain. In all things, God does work for the good of those who love him, who have been called according to his purpose (Romans 8:28). 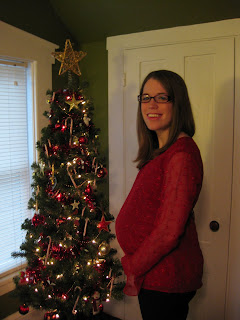 Thanksgiving Day 2009 and 33 weeks pregnant.
Now, I'm five weeks from my due date and I can't believe how soon it will be until we can hold our baby! I pray to be daily reminded that in the end, this is not our baby, but God's baby... a beautiful gift to us, as we strive to raise her in the fear and knowledge of her true Father. I pray also that God uses both the dark and joyful times in my life, the times of sickness and uncertainty as well as the times of elation and surprise, to bring Him glory and to bring me closer to Him. I know now that I'm not guaranteed perfect health or 75 plus years of life, but I also know that this life is not my true hope or desire. God has brought me to a point of becoming much more heaven-minded, truly grasping that this life is but a breath, but there is a far greater life to come for those who believe.
at 4:12 PM

Add comment
Load more...
Newer Post Older Post Home
Subscribe to: Post Comments (Atom)
Welcome! This blog was created by a stay at home mom, who desires to excel at the grace of giving. Through the years, it has evolved along with me on my frugal living journey. Today, it exists simply as an extension of my life. I hope it encourages you on your journey, too! Come join with me in the pursuit to be a trustworthy, powerful steward for the Lord amidst everyday family life.