Our Cheap Date: A Trip to Target for 34 Cents! 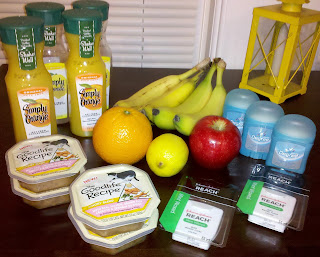 With a 9 month old and living away from family, my hubby and I don't get out too often on dates anymore. Today was a cold, blustery day on the North Shore and we spent most of it inside. I tend to get a little stir-crazy though, and by dinner time, I was ready for an outing. Where can one go on a Saturday night during a Nor'easter with a baby in tote? ... Of course, my answer was Target!

So I did a quick round up of coupons and deals, and off we went, baby and all.  We scavenged around Target for about an hour and came out with our loot, totaling 34 cents! On the drive home, we enjoyed our free Simply Lemonade drinks, with baby snoozing in her car seat. Really, you can't get much better than that... well, until Grandma comes to visit and offers free babysitting.

The Goodlife Recipe cat food was more-than-free as I used (4) $1/1 Qs and they were marked down to $.69 each (we don't have a cat, but this gave us a surplus of $1.24 which paid for some of the other items that weren't completely free). Anyone need cat food? By the way, this deal is available through October 23rd if you'd like free cat food, too. The Degree deodorant and Reach floss were both $.97 each and I used $1/1 Qs, making them more-than-free (these are ongoing deals, you can still print your Qs). The single serve Simply Lemonade and Simply Orange drinks were $1.29 at our Target and I used (4) $1/1 Qs, making them $.29 each.  Your Target might have these marked down even cheaper, as they are reportedly $1.02 at some stores, making them only $.02 each after the Q.  And I had (2) $1 off Produce Qs leftover from a couple weeks ago when they were offered on the Target site, which I used to get some fruit for pennies.
at 10:09 PM