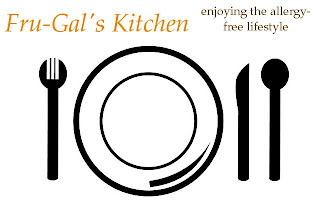 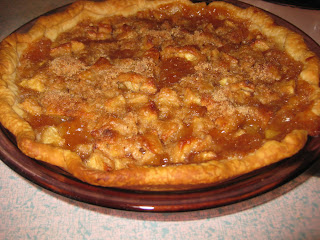 Here's the latest goodie coming out of my kitchen as I try to use up all the apples we picked from my neighbor's apple tree (with her permission of course)!

1. In a large bowl, toss apples with lemon juice, set aside.
2. Combine sugar, flour, cinnamon, salt, and nutmeg in a separate bowl.
3. Coat the apples with the sugar mixture.

Add filling to your pie crusts (note: I cheated and bought Pillsbury pie crust since I was making 5 pies. Plus, Pillsbury crusts are dairy, egg, and nut free)!

1. Mix the ingredients together until crumbly.
2. Sprinkle over pie filling.
3. Bake pie for 40-50 minutes at 400 degrees, until crust is golden brown and pie is bubbly (also, cover the crust with foil until the last 10 minutes of baking).

Since I used Pillsbury pie crust, I'd love to hear your favorite homemade recipes for next time I try this! I don't really make pies that often, but I think I would like to start attempting them more.

I made five pies and ended up giving away three. So far, these pies with crumb toppings have had rave reviews!
at 10:17 AM

Email ThisBlogThis!Share to TwitterShare to FacebookShare to Pinterest
Labels: Fru-Gal's Kitchen, Give